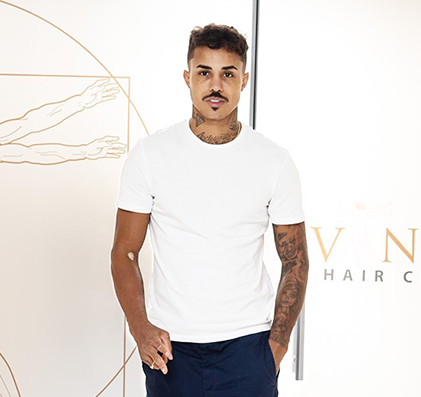 Legendary Brazilian singer Livinho revealed that he had started baldness treatment last week. He recorded the start of the procedure in a video posted on his channel at the weekend. As part of the procedure, Livinho had to shave off all his hair. He joked about this while listening to Love By Grace, recalling the famous scene of the actress Carolina Dieckmann in the soap opera Laços de Família!

The singer chose Vinci Hair Clinic for his treatment and opted for Follicular Unit Extraction (FUE) transplant surgery. This involves extracting hair follicles from one part of the head and implanting them in the area showing signs of baldness. In Livinho’s case, 1,400 hair follicles were moved to the front of his head where the baldness was most visible. These 1,400 follicles will grow normally for the rest of the singer’s life. They are expected to produce something like 4,200 hairs.

Dr Salvar Bjornsson explains: “What differentiates this technique from others is the method of graft extraction. During the procedure, which is performed under local anaesthesia, a specialised puncture tool is used to remove individual hair follicles. Up to 4,000 grafts can be removed in one session, allowing even advanced hair loss to be treated effectively.”

In another video posted on Monday, Livinho talked a little about how his recovery is going after the procedure. He admitted that he did not follow all the doctors’ recommendations, something which he thinks could explain the swelling around his eyes and on his face:

“It is very difficult. They said that I could not do physical activities or have sex. The most difficult thing was not being able to touch the smartphone while looking down, only forwards and upwards, and often I forgot that.”

He continued: “I’m at home trying to eat and drink properly. It’s important that I stay hydrated and keep my immune system strong, especially during this pandemic.  I lost blood with the operation, so I feel a bit weak at the moment.”

This Monday marks the fourth day of rest for the singer, who said that the final result of the procedure would only be seen six months from now when the scalp is completely healed. Reflecting on his decision to have hair transplant surgery, he stated:

“What made me sad about my baldness problem was not my forehead. I was more concerned about the V-shape that was becoming bigger all the time. Whenever I went to the barber, I would ask him to outline the hair around my ears and forehead. Each time, he would do it deeper and deeper. I realised it wasn’t the barber’s fault, it was my hair. Luckily, I’ve found a solution! “

If you think hair transplant surgery might be a solution for you too, why not get in touch with Vinci Hair Clinic? We offer a free, no-obligation consultation for you to get answers to all your questions. Contact us today!

Is Tap Water Damaging Your Hair?

All You Should Know About Permanent Hair Straightening

Please wait while you are redirected to the right page...